And you though foie gras was bad. Meet the ortolan.

It’s a cute little songbird, the ortolan. But rather than let it flutter around and chirrup away, our French cousins have – at least until recently – taken rather a different approach. Songbirds have always been something of a delicacy (lark tongue was, after all, a favourite of ancient Rome), but the classic ortolan recipe is… well maybe I should just get into it and let you make up your own mind.

First, catch your ortolan (with a net).
Blind it or pop it in a lightless room and fatten it up on millet seed, grapes and figs.
After a while, get some Armagnac, and drown the ortolan in it.
Pluck it and then roast it whole.
Cover your head with an embroidered napkin (I’ll explain later).
Eat it whole (it’s okay to cut it in half first, no one will know if you’re under a napkin).
Pop it in your mouth whole, with only the head poking out from between your lips (you can leave that bit to one side).
The little bones will prick your mouth a bit, but that should sort of mix your blood into the taste of the flesh and the gamey innards.

Quite the gourmet experience, n’est ce pas? You wear the napkin not just to hide the grease dripping down your face and to capture the fragrance but because it’s supposed to be such an outrageously sensuous experience that you need to hide your shame from god. As in, it’s the original guilty pleasure. Eating is done in silence but for the crunching of bones. The bird is served sizzling, so you have to rest it on your tongue as it cools and the fat runs down your gullet. With the cloth over your head, you concentrate on nothing but the food in your gob. 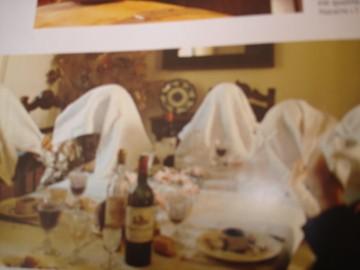 According to Stewart Allen’s book, “It should take about 15 minutes to work your way through the breast and wings, the delicately crackling bones, and on to the inner organs. Devotees claim they can taste the bird’s entire life as they chew in the darkness: the wheat of Morocco, the salt air of the Mediterranean, the lavender of Provence. The pea-sized lungs and heart, saturated with Armagnac from its drowning, are said to burst in a liqueur-scented flower on the diner’s tongue. Enjoy with a good Bordeaux.”

On New Year’s Eve in 1995, ortolan was, quite literally (and illegally), President Mitterand’s last supper. He died eight days later without having eaten anything else. It’s illegal to eat them now, and catching ortolan has been outlawed, but that’s apparently more because they were running out of them rather than France’s gourmands no longer being able to take the shame of their desires. Go to the right chef, though, and you can still get them, served on the sly in sizzling ramekins to gastronomes and hedonists – they probably taste all the better for their status as forbidden food.

For Benjamin Disraeli they were, quite simply, the best thing going. As he said in The Young Duke: “All paradise opens! Let me die eating ortolans to the sound of soft music.”

Here’s a video of Jeremy Clarkson (quelle surprise) getting stuck in:

(ortolan, not to be confused with Autobahn – that’s just a great piece of Kraftwerk)

This entry was posted in Uncategorized and tagged cooking, foie gras, forbidden food, gastronomy, gourmet, guilty pleasure, mitterand, not really sure how i feel about this, ortolan, strange food. Bookmark the permalink.

4 responses to “And you though foie gras was bad. Meet the ortolan.”