Bizarre piece by Dan Levin (with additional reporting by Shi Da) in the New York Times. Pics by Aly Song/Reuters. 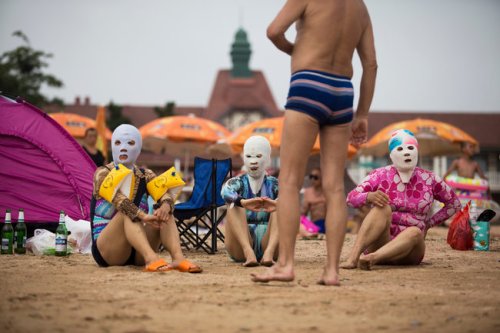 QINGDAO, China — It was enough to make a trio of heavily tattooed young men stop their playful splashing and to prompt a small boy to run to his mother in alarm: a woman rising out of the choppy waves of the sea, her head wrapped in a neon-orange ski mask.

As she made her way toward the shore, more people stared. A man floating in a yellow inner tube nudged his female companion, who muttered the question many others must have been asking themselves: “Why is she wearing that?”

“I’m afraid of getting dark,” said the mask-wearer, Yao Wenhua, 58, upon emerging from the seaweed-choked waters of this seaside city in China’s eastern Shandong Province. Eager to show why she sacrificed fashion for function, Ms. Yao, a retired bus driver, peeled the nylon over her forehead to reveal a pale, unwrinkled face.

“A woman should always have fair skin,” she said proudly. “Otherwise people will think you’re a peasant.”

For legions of middle-class Chinese women — and for those who aspire to their ranks — solar protection is practically a fetish, complete with its own gear. This booming industry caters to a culture that prizes a pallid complexion as a traditional sign of feminine beauty unscathed by the indignities of manual labor. There is even an idiom, which women young and old know by heart: “Fair skin conceals a thousand flaws.”

With the pursuit of that age-old aesthetic ideal at odds with the fast-growing interest in beachgoing and other outdoor activities, Chinese women have come up with a variety of ways to reconcile the two. Face masks like Ms. Yao’s have taken this popular beach town by storm. In cities, the summertime parasol is a more familiar accouterment, many adorned with rhinestones, lace or sequins (and sometimes all three). Those who need both hands free are fond of the tinted face shield, the perfect accessory for riding a bike — or welding. The fashion-conscious favor a chiffon scarf draped over the face.

What about arms exposed to the sun’s tanning rays? A search on China’s equivalent of Amazon yielded 20,000 results for “sun protection gloves.” These varied from form-fitting leopard-print sleeves that end at the wrist to arm-length gloves made of black lace.

Meanwhile, drugstore shelves across China bulge with rows of creams and cosmetic masks with names like White Swan and Snow White, promising a natural-looking aristocratic hue.

On a recent afternoon at Qingdao No. 1 Beach, the sand and surf were thronged. Beside the rows of orange beach umbrellas, people had erected dozens of camping tents, ignoring the amplified announcements that prohibited their use. Others made shelters out of multiple umbrellas or just piled on layers of fabric.

South Beach this was not. Some middle-age men chain-smoked in the shallows, their ample bellies bulging over diminutive Speedos. Under the watchful eyes of their parents, naked children built sand castles and relieved themselves in the moats. Older people were enjoying the sand, too, some using it to playfully bury their friends.

Few adults were entirely comfortable swimming in the ocean, judging by the ubiquity of inflatable armbands, inner tubes and rafts. Floating among them, looking like a flock of colorful waterfowl, were a number of women in masks. Some had even donned wet suits for total sun protection.

The masks, a relatively new product made of stretchy fabric commonly used in bathing suits, elicited a range of reactions from beachgoers.

“That is way over the top,” said Sun Li, 43, a gynecologist from Henan Province, when asked about the face masks. But Ms. Sun herself sat under an umbrella wearing a sun hat, sunglasses, a polka-dot surgical mask, a long-sleeve shirt and lace gloves. A shirt was draped over her legs for good measure.

Nearby, Li Benye lay on newspaper, shaded by twin parasols. Despite her commitment to paleness, she found the masks mystifying.

While fair skin is prized across Asia, the women were, in fact, Chinese. The masks not only made them impervious to ultraviolet rays but also self-consciousness.

“Does it look like I care what people think?” bellowed Su Ailing, 57, clad in a red mask, blue goggles and a wetsuit. “The tourists dress skimpy, but we locals know how to protect our skin.” 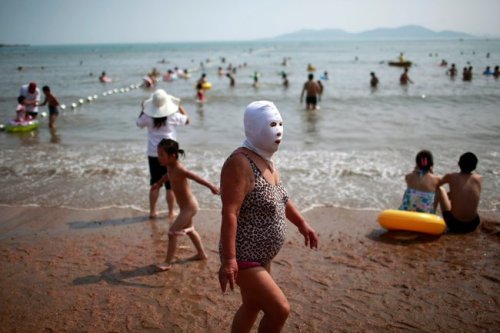 The masks are a specialty of Qingdao, a German colony before World War I that is home to the Tsingtao Brewery. A few weeks ago, photographs of local women wearing such attire spread widely on the Internet, setting off mockery online but also a run on nearby shops.

“I just had to have one,” said Liu Jia, 32, the whites of her eyes gleaming through the holes of a pink mask, which matched the polka-dot sarong tied around her shoulders. Finding the item, she said, had proved arduous, with many store owners refusing to admit they had masks in stock. “I had to beg and plead,” she said.

The sudden scarcity, it turns out, may not have been a simple case of demand outrunning supply. After the photographs caught the attention of the nation, the local government ordered businesses to stop selling them, according to several shop owners, who said they were told the ban was due to concerns over “quality control.”

One seller, who declined to be identified for fear of angering the authorities, kept her supply of masks hidden under the counter. Only after repeated requests and vows of secrecy did she agree to part with one for 20 renminbi, about $3. “I don’t understand why the government is doing this,” she said, glancing nervously at the front door. “People just don’t want to get tan.”

Reached by phone, the Qingdao Administration for Industry and Commerce denied playing the role of fashion police. “Anybody who wants one is free to buy it in Qingdao,” said a man who gave his name as Director He.

So what explains the skittishness of so many proprietors? “The only reason why people think they shouldn’t be selling masks,” he replied, “is probably because they’re afraid thugs might use them for robbing banks.” 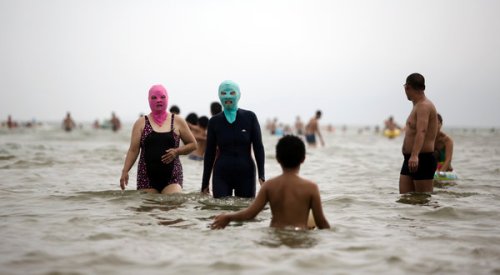