Studies of a man’s head 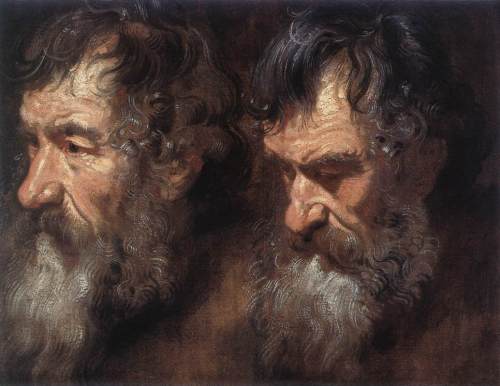 The preparatory work for large paintings was not usually confined to one or more oil sketches, but generally included detail studies as well. The Studies of a Man’s Head painted from life by Van Dyck are an excellent example of this. 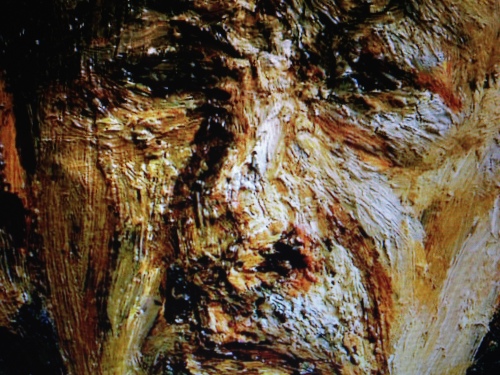 Freud was born in Berlin but his father, Ernst, moved the family to England in 1933 to skip the rise of Nazism. Grandson of Sigmund Freud, elder brother of Clement Freud (who told the world’s funniest joke), he seems to have chosen to paint without much fuss or fanfare – it’s what he was meant to do. He was one of a group of artists in Britain at the time, the “School of London”, which along with Francis Bacon and a few others concentrated on figurative painting. He had a pretty crazy personal life (many lovers, at least 14 kids) – but there’s plenty on that elsewhere.

Freud’s subjects, who needed to make a very large and uncertain commitment of their time, were often the people in his life; friends, family, fellow painters, lovers, children. He said, “The subject matter is autobiographical, it’s all to do with hope and memory and sensuality and involvement, really.” However the titles were mostly anonymous, and the identity of the sitter not always disclosed; the Duke and Duchess of Devonshire had a portrait of one of Freud’s daughters as a baby for several years before he mentioned who the model was.

In the 1970s Freud spent 4,000 hours on a series of paintings of his mother, about which art historian Lawrence Gowing observed “it is more than 300 years since a painter showed as directly and as visually his relationship with his mother. And that was Rembrandt.” For me, the ones of his mum are the most emotive of all. She was in a deep depression at the time as Ernst had died, and you can instantly feel that mood in the room, almost disengaged (he couldn’t paint her before because she was too animated and interested in him) as she stares into space.

A prodigious worker, Freud spent a huge amount of time on his paintings, and always needed to have the subject in the room. He’d work in five-hour sessions, and a single painting easily take over two thousand hours to complete. He’d start by drawing in charcoal, then paint a small area of the canvas, and gradually work outward from there. For a new sitter, he often started with the head as a means of “getting to know” the person, then painted the rest of the figure, eventually returning to the head as his comprehension of the model deepened. A section of canvas was intentionally left bare until the painting was finished, as a reminder that the work was in progress. The finished painting is an accumulation of richly worked layers of pigment, as well as months of intense observation.

It’s crazy – the closer you get, the more abstract the paint becomes. I can’t imagine how he could stare intently at someone’s mouth, say, then go to the canvas and carve a green slash into a thick layer of paint on it, and yet, from a metre away, it looks exactly perfectly right in tone and texture and everything. Astonishing. And a lot of people talk about the distance between artist and subject, or the odd perspective (he often painted from above) and the inherent anger, but to be honest I didn’t necessarily get that. To me it almost makes things more intimate, like he’s there, but not necessarily intruding, a bit like Dad coming in and waking you up for school or something. There’s a familiarity to it and passion, but I’m not sure anger is the word I’d use.

I also really like the way he does people’s foreheads. Quotes below – and they’re relevant for all types of artist, writers, singers, painters, the works.

“There is a distinction between fact and truth. Truth has an element of revelation about it. If something is true, it does more than strike one as merely being so.”

“I would wish my portraits to be of the people, not like them. Not having a look of the sitter, being them.”

“The model should only serve the very private function for the painter of providing the starting point for his excitement. The picture is all he feels about it, all he thinks worth preserving of it, all he invests it with.”

“A painter must think of everything he sees as being there entirely for his own use and pleasure.”

“Now that I know what I want, I don’t have to hold on to it quite so much.”

“Painting is sometimes like those recipes where you do all manner of elaborate things to a duck, and then end up putting it on one side and only using the skin.”

“Full, saturated colours have an emotional significance I want to avoid.”

“The aura given out by a person or object is as much a part of them as their flesh.”

“The painter must give a completely free rein to any feeling or sensations he may have and reject nothing to which he is naturally drawn.”

“I remember Francis Bacon would say that he felt he was giving art what he thought it previously lacked. With me, it’s what Yeats called the fascination with what’s difficult. I’m only trying to do what I can’t do.”

“A painter’s tastes must grow out of what so obsesses him in life that he never has to ask himself what it is suitable for him to do in art.”

“The subject matter is autobiographical, it’s all to do with hope and memory and sensuality and involvement really.”

“The longer you look at an object, the more abstract it becomes, and, ironically, the more real.”

“What do I ask of a painting? I ask it to astonish, disturb, seduce, convince.”

(To Martin Gayford about his portrait) “The picture of you has always been linked in my head with the one of the back end of the skewbald mare.”

“I think half the point of painting a picture is that you don’t know what will happen. Perhaps if painters did know how it was going to turn out they wouldn’t bother actually to do it.”

“The only secret I can claim to have is concentration, and that’s something that can’t be taught.”

“I could never put anything into a picture that wasn’t actually there in front of me. That would be a pointless lie, a mere bit of artfulness.”

“The painting is always done very much with [the model’s] co-operation. The problem with painting a nude, of course, is that it deepens the transaction. You can scrap a painting of someone’s face and it imperils the sitter’s self-esteem less than scrapping a painting of the whole naked body.”

“I don’t want any colour to be noticeable… I don’t want it to operate in the modernist sense as colour, something independent… Full, saturated colours have an emotional significance I want to avoid.”

“The aura given out by a person or object is as much a part of them as their flesh. The effect that they make in space is as bound up with them as might be their colour or smell … Therefore the painter must be as concerned with the air surrounding his subject as with the subject itself. It is through observation and perception of atmosphere that he can register the feeling that he wishes his painting to give out.”

“A painter must think of everything he sees as being there entirely for his own use and pleasure.”

The Inspiration of St Matthew 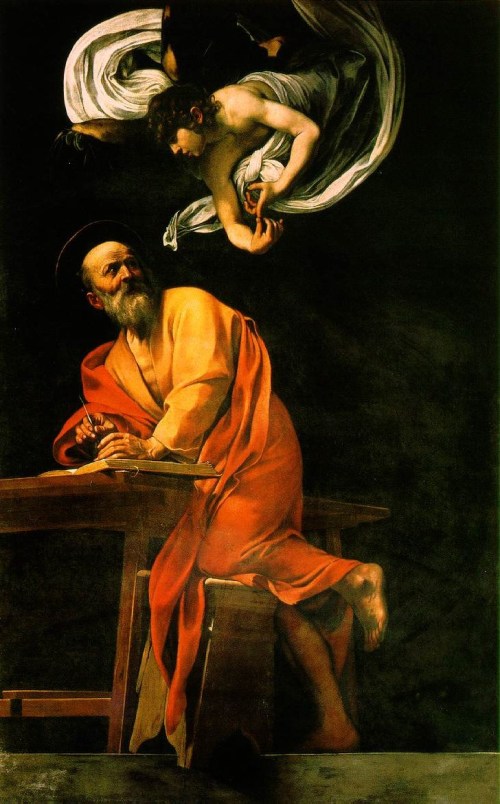 Starvation, cannibalism and madness – The Raft of the Medusa 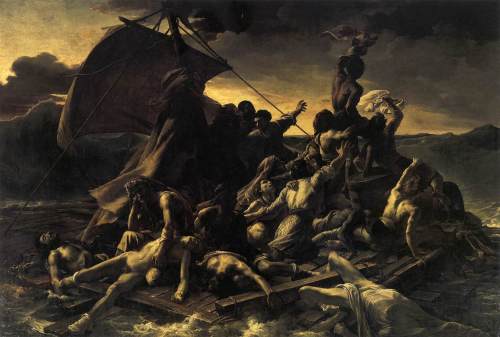 The Raft of the Medusa (Le Radeau de la Méduse) is an early 19th century oil by French Romantic painter Théodore Géricault (1791–1824), and an icon of French Romanticism. At a whopping 5 x 7 metres, it shows the horrifying aftermath of the wreck of the French naval frigate Méduse, which ran aground off the coast of Mauritania on July 5, 1816.

At least 147 people were set adrift on a hurriedly constructed raft; all but 15 died in the 13 days before their rescue, and those who survived endured starvation, dehydration, cannibalism and madness. The event became an international scandal, in part because its cause was widely attributed to the incompetence of the French captain perceived to be acting under the authority of the recently restored French monarchy.

In choosing the tragedy as subject matter for his first major work, Géricault consciously selected a well-known incident that would generate great public interest and help launch his career (something modern artists aren’t exactly strangers to – a bit like painting the Twin Towers today). The event fascinated the young artist, and before he began work on the final painting, he undertook extensive research and produced many preparatory sketches. He interviewed two of the survivors, and constructed a detailed scale model of the raft.

His efforts took him to morgues and hospitals where he could view, first-hand, the colour and texture of the flesh of the dying and dead. As the artist had anticipated, the painting proved highly controversial at its first appearance in the 1819 Paris Salon, attracting passionate praise and condemnation in equal measure. However, it established his international reputation, and today is widely seen as seminal in the early history of the Romantic movement in French painting.